In light of my being too damn sick to do anything this week, I present to you a little something else… 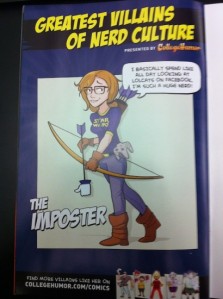 Well, we all know it’s bullshit, but frankly, it’s some insensitive shit to see this in the back of comics that men and women pay good money for. One fan in particular, who made a post over at The Mary Sue found this in the back of her issue of Batman.

But, see, other people know it’s bullshit too, and one person in particular who brought us forth just WHY we should fear fake geek girls.

It’s a bit white bread, but you know what? The satire is dead on, and I can’t help but love a well-placed shot at Aquaman.

Because seriously, he sucks.

Namor is so much better.

4 thoughts on “The Fake Geek Girl”