There are many fine people deserving of awards and recognition.

Katy Perry, however, IS NOT one of them. 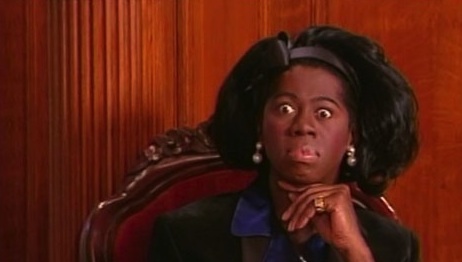 I would touch on how indicative this is of the gay community to shuck and jive and sell out for the first chance to worship straight oppressors when they haven’t done shit for us. I would also touch on how the LGBTQ “community” puts too much emphasis on worshipping “allies” (or in this case oppressors) and not uplifting our own. I would discuss all of that but there’s simply not enough bandwidth on the entire internet.

However the money shot quote at the end of the article brings it home:

“I don’t want to celebrate these people any more than I want to celebrate a straight cis person being nice to me because I happen to be queer. Congratulations on being a decent human, but I refuse to throw a dinner honoring the fact that you think I should get married someday (which isn’t something I even want to fight for, frankly, and many other queers are with me on that).

No individual is flawless and no saint is without a past. I’m not asking that our heroes be impossibly good human beings who have spent a lifetime adhering to only the highest of morals. On the contrary, I want people in charge who have period stains on their briefs and a love of guilty pleasure television. Someone who knows what it’s like to be an outcast, or the worst at math, or has spent a lifetime facing oppressions that have raised them up into an outstandingly experienced human being. Cracks let the light in. Give me queers who have been around the block. Give those queers a raise, and throw them dinner parties. See if they want a dinner party, or if they want you to give that money to charities, to shelters, to causes that directly affect the queer community. Let us be a community that honors our own and uplifts our own and directly cares for our own, rather than a community that thinks being prostrate to a hetero mainstream will get us anywhere besides, I guess, feeling like a plastic bag.”

I promised a Martha Jones salute in my intro post, and people seemed enthusiastic about it, so here it is!  (warning: Rose gets compared mildly unfavorably a few times, for those who would be bothered by that)

I’ve recently been watching New Who with a friend (her first time through), and I’ve been struck even more strongly with how Martha has the best companion character arc in the entire series so far.  The best.  And this despite the show constantly and inexplicably treating her as second-class to Rose!  But one of the greatest things about Martha is that in the final tally, how the Doctor treats her isn’t the most important part of her life, because unlike a lot of the other companions, Martha is so much more than her period of traveling with the Doctor.  She’s not defined by him.  After traveling with him—even before traveling with him—she’s got kick-ass narratives all of her own, and she’s going to live her life on her own terms (now alas, if only we could have seen more of her story on the show, but we see enough to know it is there).

END_OF_DOCUMENT_TOKEN_TO_BE_REPLACED

Hi there!  I’m a new contributor here at Ars Marginal. My pop culture habits are definitely in the nerd demographic, so you can expect posts from me that explore why Martha Jones is awesome or are recommendations for queer-normative fantasy.  Being a numbers geek, I’m also fond of doing the math on institutional racism / sexism / other -isms in media, which is useful whenever people tell me I’m either making things up or, alternatively, that it doesn’t matter if the straight-white-male narrative dominates. *stabstab*  Yeah.

I also work in Hollywood, and am faced daily with how backward and behind the film industry is.  Popular media might be shaping people’s attitudes in fundamental ways (heck, Racebending’s recent review of Red Dawn pointed out that 28 percent of Americans rarely or never interact with people of Asian heritage, leaving movies their only exposure to Asian-American diversity), but that responsibility never even crosses the minds of the majority of writers / directors / casting staff here in Los Angeles.

Anyway, I thought I’d introduce myself by linking to a few posts I’ve written recently on institutional racism:

Why Is the “Normal Television Family” Always White?

It pisses me off that Hollywood only allows diversity in families that aren’t the two parents, 2.5-kids-and-a-dog, white picket fence American “ideal”:

But, of course, the family who moves into the alien development, the “normal” human family we’re meant to contrast the aliens against, is all white.  Because white is normal.  And human.  It’s the weird alien family who cry tears of green goo out their ears who have people of color among them; diversity is acceptable there.  Why not have had the human family be mixed-race, or Hispanic, or Asian?

An Open Letter to John Scalzi

John Scalzi is a science fiction writer (and current president of the Science Fiction Writers of America) and runs the popular blog Whatever, where he’s made positive posts before on gender and race.  Which meant I was sorely disappointed with his recent Star Trek parody novel Redshirts:

[Y]ou made close copies of exactly the five white men in Star Trek’s main cast—and only them, because for some reason the two crew members you chose to excise were the black woman and the Asian-American man.

How could you possibly think this was okay?

[…]  Mr. Scalzi, I’m sorry to say this, but you did worse than a show that was written in the sixties.

Scalzi stops by in the comments to respond and offer his reasoning for doing it, saying that he was going for a commentary by deleting all the diversity.  I tell him I do not think it worked.

Anyway, this is already longer than I meant an intro post to be, so hi, thanks for having me, and I’m excited to be here!  (And if anyone would like me to put together a post here on anything specific that relates to the math of popular media and/or Hollywood behind-the-scenes, feel free to drop me a comment and let me know!)

Hello everyone and welcome to the latest installment of Brain Food!

On today’s episode, I review two fo DC comics’s Green Lanterns… Green Lantern #0 and Earth 2#3.
Neither one is good.

I recently completed a draft of my new play, Encanta. I like to describe it as Kirikou and the Sorceress meets Moonstruck on the island from The Tempest.

The story itself is pretty simple. Penzima is a pirate who washed ashore after a storm sank her ship. After making fast friends with best buddies Armando and Carlos, she soon meets Katrina, a powerful sorceress feared and hated by everyone. Sparks fly, and Penzima is immediately smitten with Katrina, who is in turn drawn to the charming, witty Penzima. Penzima vows to show Katrina that she is worthy of her love, but will that be enough?

What really excites me about Encanta is that it’s a play about the magic of love, lust, and romance that focuses on LGBTQ people of color. All the characters are Latin@ or Afro-Latin@.

Encanta is all about people who are being silly and crazy and in love and using magic who just happen to be LGBTQ people of color. Too often, we only get to suffer because it’s “inspiring,” and we only be funny when who we are is the butt of the joke.

Fuck that shit. I want my escapist fantasy too. I want passion and romance too. I want my happily ever after too. And since the powers that be seem more interested in not scaring off straight people and white folks, I made Encanta for myself.